Looking for a new laptop in December 2021?

Reddit is the best place to start looking for laptop recommendations. After all, if people praise a laptop they’ll go to Reddit and have a dazzling discussion about it.

On the contrary, if there is a certain kind of laptop which you should avoid, you’ll find it out on Reddit as well.

So, let’s start by checking out all the recent posts as of December 2021. After reviewing all the overall laptop options, we’re also going to take a look at the best gaming laptop. But before we go into detail, here are the winners up-front:

So, according to Reddit, the new MacBook Pro M1 is the best laptop in 2021. You can choose between the 14-inch and the 16-inch version. Both are way ahead it’s competition.

But let’s check why that is and also let’s check the alternatives in case you want to use a Windows laptop.

First of all, what kind of laptop are we looking for on Reddit? After all, different needs require different laptops, right? So, we’re going for a general laptop.

A laptop which is suitable for multitasking, working and maybe even some gaming. Something which doesn’t get too hot and something which in terms of volume is clearly distinguishable from your vacuum cleaner.

Since we’re going for multitasking, a quad-core processor is the bare minimum.

The first thing I’ve realised, while checking out recent posts, is that a lot of Redditor’s share this opinion:

That doesn’t come as a surprise, does it? 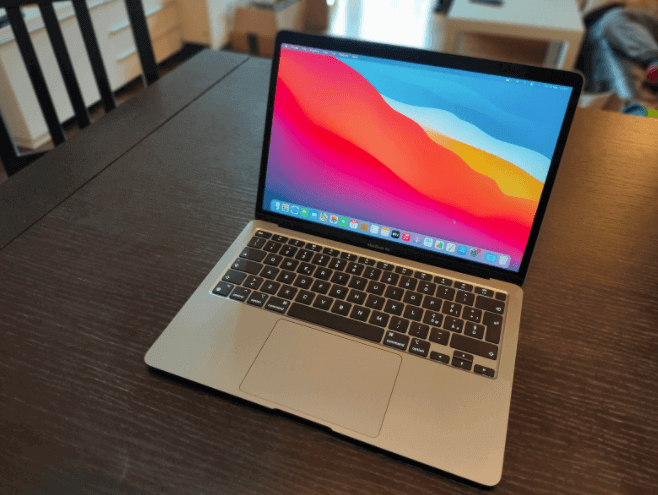 The M1 MacBook, no matter if Air or Pro, was all over Reddit and the media. The speed and the overall power of the M1 chip are truly amazing. If you search for the M1, in particular, you will find dozens of posts where people report that the M1 MacBook is a life changing device.(1)

So, first on our list is the MacBook M1 Air. I’ve chosen the Air model because most people say there is no significant difference in terms of performance, compared to the Pro.

But let’s take a closer look. What is the real difference between the M1 Air and the M1 Pro.

You probably won’t notice the display difference, so that shouldn’t be a reason to go for the Pro. However, the battery life might be worth considering, as well as the cooling. The Macbook Air M1 doesn’t have a fan.

But here’s the deal: With the M1 chip you don’t necessarily need a fan, at least not if you’re not a professional video producer. I see a lot of Redditor’s reporting that although they’ve bought the Pro version, they haven’t been able to tell one occasion where the fan kicked in.

I, for myself, am using the MacBook Air M1 version and I was able to use Final Cut Pro without missing a beat. It’s the preferred version, especially on Reddit. Just take a look at these posts.(2)

What you should be aware of when buying the M1?

No matter if you get the M1 Pro or Air, you should be aware of two important things.

The first thing is pretty obvious, if you need Windows, don’t get a Mac. The second thing is compatibility. While most applications are working either natively or with the assistance of the Rosetta emulator, some still won’t work.

So, before you buy, make sure your favourite application is working fine.

As of October 2021, there is a new sheriff in town when it comes to the best laptop. The MacBook Pro M1X 14-inch and the MacBook Pro M1X Max with the 16-inch display. As of the December 2021, it’s not easy to get one, especially because christmas is coming.

But that doesn’t come as a surprise, the specs are just amazing:

The one in the middle in the 15-inch MacBook Pro.

So, what does Redditor’s report about the new MaxBook Pro M1X? Here are some nice Q&A’s I’ve come across on the latest post:

So, let’s summarize all the points:

I think it’s safe to say, that’s currently one of best laptops you can get.

Now it’s Windows time. A lot of people don’t like Apple laptops or are simply used to Windows. Here’s what Reddit says about the best Windows laptops.

We start with the HP Pavilion with an AMD Ryzen 5 4500U processor. I’ve found it on Reddit while searching for MacOS alternatives.2

Redditor’s like the overall feeling of the HP Pavilion laptop. The case feels premium and the performance is top-notch. The speakers are widely appreciated, and users love the brightness of the display.

What about the battery life?

Battery life is one of the aspects why I always love getting a MacBook. However, Reddit’s recommendation for this laptop was on point since HP Pavilion users report that they are pretty happy with the battery life. 6.7 hours shouldn’t be a problem.

Another important thing is that it doesn’t get warm or loud. At least, I couldn’t find any users complaining about it. I think if you’re on Windows, the HP Pavilion Ryzon is Reddit’s go-to choice as of December 2021.

What about Intel vs. AMD?

As you’ve seen, the second recommendation was including the AMD chip and not Intel. After reading tons of Reddit posts about this topic, AMD is currently the better option in terms of what you get for your money. However, this is still a pretty divisive topic.

This Reddit user sums it up pretty great in my opinion(3): 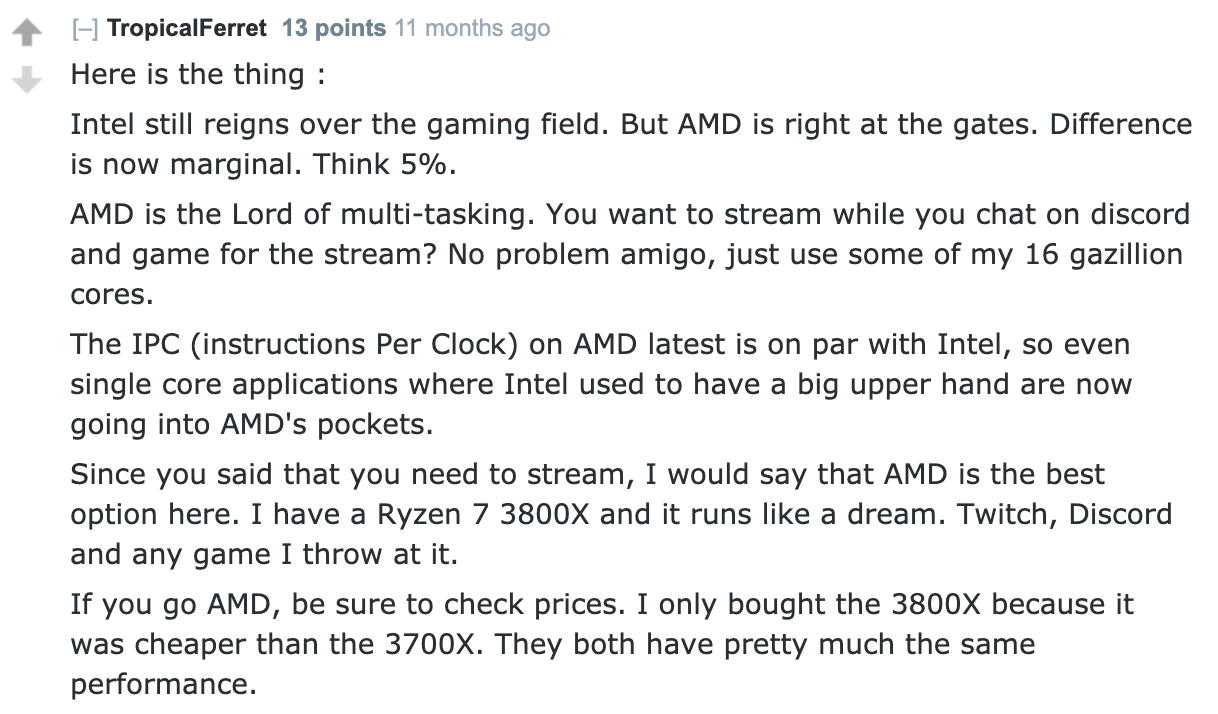 Next on the list is the Lenovo Thinkpad. This is also the most affordable laptop recommendation from Reddit.

Fun fact: Did you know that Thinkpads are 29 years old? They were used to be built by IBM, but Lenovo took over in 2005. Since then, they’ve evolved into one of the most popular laptop brand, not only on Reddit.

But which Thinkpad to choose in 2021? Again, let’s say you’re looking for a general purpose laptop, then the T14 is a fascinating machine. However, if you have any other specific needs, take a look at all the other models as well.

Lenovo offers the W,X and the T series.

Reddit is recommending the T series over the X series. The Thinkpad X series used to be the smallest and lightest option. However, this has changed since the T14 came out. Now you get the best bang for the buck with the T-series.

If something is broken, it’s easy to repair it. They have a spill-resistant keyboard and Thinkpads are reliable beasts. If you’re looking for a business laptop, Thinkpads are the way to-go.

Now let’s check out some budget options. I’ve searched Reddit for the best laptop under $400.

Luckily this was an easy job, since there was one laptop which was being recommended on every $400 post.

So, what about Gaming? What is Reddit’s recommendation for 2021?

One comment which stuck with me on the gaming laptop subreddit was this one:

This baby has a RTX3070 GPU with an Intel i7 processor. It’s currently available on Amazon for approx $3.000.

It’s a very powerful gaming laptop, everything runs ultra in 1080p and the building quality is superb. It comes with a super-clear display which has 15.6 Inches. The WiFi is called the “Killer LAN E3100” and you’ll get 5.2 Bluetooth. 32GB DDR4 Ram.

So, there is nothing missing right here. This laptop has it all, everything a gaming laptop needs in 2021.

One thing you should know is that the battery lasts less than 2 hours while gaming, but that doesn’t come as a surprise and it’s the case with most gaming machines.

That’s it for now. If you have any recommendation or comment, feel free to send me a message.